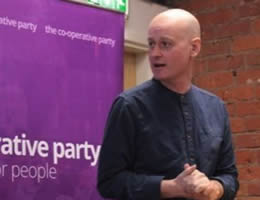 Councillor Matthew Brown has helped pioneer Community Wealth Building in Preston and Lancashire using a number of levers to retain and democratise wealth in the local economy. The interest generated in “The Preston Model” has been acknowledged by The Labour Party and Cooperative Party nationally with Birmingham, Ealing and a number of EU cities beginning to embrace similar strategies.

A key feature has been to engage placed based public and quasi public “anchor institutions” to increase spend on goods and services in the local economy including plans to create new worker led cooperatives. Credit union expansion, community banking, localised pension fund investment, energy democracy and employee ownership also contribute to a long term strategy for system change at a local level.

In the current debate around a gradual move to a post capitalist economy following the failings of austerity and neo liberalism these are essential ideas to hear about.

Designing institutions for a collaborative future

What if every community had a 21st Century town hall where citizens could collaborate in the real, offline world?