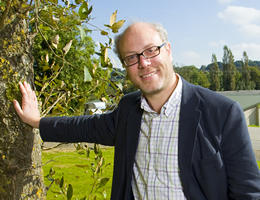 Vivian Woodell is the founder and Chief Executive of The Phone Co-op, one of the UK’s most innovative and most successful new co-operative enterprises. Since 1998, The Phone Co-op, which is owned and controlled by its consumer members, has built a profitable business with 30,000 telephone and Internet customers, over 70 employees, and an annual turnover of £11 million.

The Phone Co-op’s success is built on a radically different ethos from most telecoms businesses, putting customer-owners at the centre of the way the business is run. Its members have also provided all the capital the business needs. The Phone Co-op’s ethics, driven by members, also include more egalitarian treatment for colleagues (the top to bottom salary ratio is under 5:1) and a strong focus on environmental issues.

Vivian is also an elected director of The Midcounties Co-operative, one of the UK’s largest independent retail co-operatives with a turnover of over £1bn, where he also served as President for eight years, and currently serves on the Energy Committee, the board subcommittee which oversees Co-operative Energy. He is currently on the board of Co-operatives UK and has served as a member of the Senate and National Members’ Council at The Co-operative Group.

Prior to starting The Phone Co-op, Vivian had no background in telecoms, but had worked extensively in the co-operative movement. His earlier roles include: Executive Director of the Social Economy Consortium, which managed Co-operative and Social Economy development projects in Central and Eastern Europe, and Project Manager with the European Social Economy Information Network, ARIÉS. In the past he has served as a board member of CECOP (the European Confederation of Worker Co-operatives), as a member of the executive of CICOPA (the equivalent global body, part of the International Co-operative Alliance) and as a trustee of Co-operative and Community Finance.

In a Dragon’s Den style session the three finalists of the #DigiDen competition will pitch their ideas for a digital co-op. The winner of the £2,000 start-up funding and five days of business support will be picked by the audience.

How to finance: crowdfunding, community shares and crypto equity

Venture capital is not the solution! This session looks at the alternative forms of funding available to Co-ops including crowd funding, community shares and crypto equity.