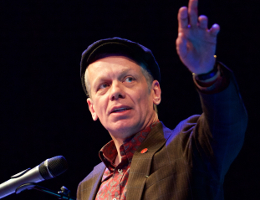 Richard Barbrook is a senior lecturer in the Department of Politics and International Relations at the University of Westminster. In the early 1980s, he was involved with pirate and community radio broadcasting. In 1995, he and Andy Cameron wrote The Californian Ideology, which was a pioneering critique of the neoliberal politics of Wired magazine. His other important writings about the Net include The Hi­Tech Gift Economy, Cyber- communism, The Regulation of Liberty and The Class of the New. The Media Ecology Association selected Imaginary Futures as the winner of the 2008 Marshall McLuhan Award for Outstanding Book of the Year in the Field of Media Ecology. In 2014, Richard’s book about Situationist gaming was published: CLASS WARGAMES: Ludic Subversion Against Spectacular Capitalism.

“Platform Cooperatives
We will foster the cooperative ownership of digital platforms for distributing labour and selling services. The National Investment Bank and regional banks will help to finance social enterprises whose websites and apps are designed to minimise the costs of connecting producers with consumers in the transport, accommodation, cultural, catering and other important sectors of the British economy.”

How best can we use open source tools to let a million people write the next Labour manifesto?