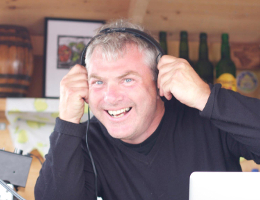 Social entrepreneur Pete Lawrence is the conceptualist and firestarter of Campfire Convention “an evolutionary platform for creative thinkers, funded and shaped by its own members”, a concept he has been working on for the last couple of years:

Prior to that, he is probably best known as the co-founder of The Big Chill, and originator of the ’boutique’ festival experience. The event quickly attracted a large number of very loyal followers, building to a peak in 2005 of 35, 000. Pete gave early exposure to such names as Lily Allen, Goldfrapp, Amy Winehouse, Gotan Project, Mr Scruff, Röyksopp, Zero 7 and Lemon Jelly. After establishing itself as one of the top half dozen UK festivals, Pete was included in Time Out’s Top 100 ‘movers and shakers’ alongside the likes of Ricky Gervais, Gordon Ramsay, Madonna, Phillip Green, Brian Paddick, Ken Livingstone and Tony Blair.

In the mid 80s Lawrence was recognised as a respected tastemaker with an unconventional flair when he discovered and spontaneously recorded US folk singer Michelle Shocked on a walkman around a Texas campfire for his fledgling Cooking Vinyl label. The resulting album ‘The Texas Campfire Tapes’, with its £1 ‘field recording’ budget, went on to top the independent album charts in 1987 and establish the label at the forefront of the world and roots music scenes.

Subsequently, Pete also became a writer, radio DJ and journalist. Through the 90s he had regular columns in Top, Update and Jockey Slut as well as founding,  editing and publishing his own On magazine. Pete has arguably been one of the most influential and respected tastemakers on the electronic and downtempo scenes, and made his BBC Radio 2 debut on August Bank Holiday 2006 with a two hour chill out show. As an artist, he records under the name of Chilled By Nature, and in 2006 released his first album ‘Under One Sun’ on Big Chill Recordings, featuring a number of live guests, including The Swingle Singers, and Mozez of Zero 7 fame, who collaborated with Pete on ‘State Of Grace’.

Pete resigned as a shareholder and director of The Big Chill in early 2008, moving to the village of Braunston in Northamptonshire to renovate a house and write a book, soon to be published. He has principally spent his time developing a blueprint for a social network, Campfire Convention, an evolutionary platform for creative thinkers, funded and shaped by its own members, which would aims to stage events locally with community focus.

The art of combining online and offline co-operative networks

To change the way we govern our communities, our cities, and our ecosystems, a variety of different actors and stakeholders – formal and informal, big and small – need to work together – often, for the first time. Given that, our journey is not just a matter of new tools, models, or platforms; qualitative issues matter, […]